For Christ did not enter a sanctuary made by human hands, a mere copy of the true one, but he entered into heaven itself, now to appear in the presence of God on our behalf. 25 Nor was it to offer himself again and again, as the high priest enters the Holy Place year after year with blood that is not his own; for then he would have had to suffer again and again since the foundation of the world. But as it is, he has appeared once for all at the end of the age to remove sin by the sacrifice of himself. And just as it is appointed for mortals to die once, and after that the judgment, so Christ, having been offered once to bear the sins of many, will appear a second time, not to deal with sin, but to save those who are eagerly waiting for him.

There is a Babylonian creation myth where the cosmos is created by the god Marduk, from the corpse of his mother that he has slaughtered.  In this story, human beings are created from the blood of another executed god.

The Babylonian creation story is the myth of redemptive violence, in which violence can be redeeming. Its themes are retold throughout history and into the present day.  In the final scenes of a Spiderman film, he is beaten to a pulp and is about to die but somehow, he manages to survive and his opponent is killed.  In the 2012 Tomb Raider series, Lara Croft is beaten but survives and then is a warrior that kills others.  John McClane, Bruce Willis’ character in Die Hard, is beaten and then goes on a rampage to resolve the situation (though perhaps the most contentious thing about Die Hard is whether or not it is a Christmas film).  In the cartoon, Bluto beats Popeye and essential sexually assaults Olive Oyl, but at the last minute Popeye finds some spinach, is revived and beats Bluto.  In eight seasons and 2 films, Kiefer Sutherland plays Jack Bauer, an American agent who endures horrific trauma and beatings, always escaping and then torturing the enemy to save America from terrorism.  The myth of redemptive violence is very much alive.

However, that is not a myth that underpins the Christian tradition.  It was during the Jewish captivity in Babylon that Genesis 1 was developed as a direct rebuttal to the Babylonian myth.[1]  In the Jewish (and Christian) tradition, creation is not an act of violence, but a good God creating a good world that is ordered and not chaotic.  It is only later that evil slithers in.

One of the other readings for today was from Jonah 3.  In verse 5 we hear that “The people of Nineveh believed God’s message, and from the greatest to the least, they declared a fast and put on burlap to show their sorrow.”  What we don’t hear in today’s reading is Jonah’s response to this.  In Chapter 4:1-3, Jonah says to God, “This change of plans greatly upset Jonah, and he became very angry. So he complained to the Lord about it: “Didn’t I say before I left home that you would do this, Lord? That is why I ran away to Tarshish! I knew that you are a merciful and compassionate God, slow to get angry and filled with unfailing love. You are eager to turn back from destroying people.  Just kill me now, Lord! I’d rather be dead than alive if what I predicted will not happen.”  We often presume that Jonah ran away from God’s calling because he was scared, but that is not the case.  Jonah was committed to the myth of redemptive violence, he wanted  the Ninevites to be destroyed, he wanted to see redemptive violence enacted on them.  But God did not choose to do that.

Then there is today’s text from Hebrews, which is about the role of Jesus’ death in the redemption of humanity.  Last week at our vicar explained how Jesus’ death made a way for us to access the fullness of God.  The fancy name for this is “atonement”, which Google tells me is defined as, “The reconciliation of God and humankind through Jesus Christ.”

Now, you might be under the impression that everyone has the same idea about Atonement or that generally Christians understand Jesus’ death the same way, but actually there are seven different theories for how Atonement works.  Some theories complement or build on one another, some are completely opposing. And although it might be a bit tricky, I’m going to try and talk you through these theories. 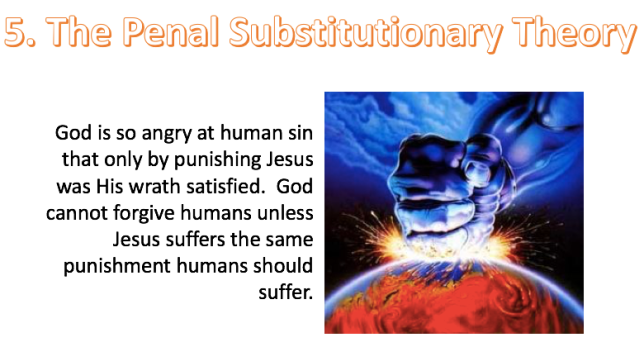 Most of us are probably familiar with Penal Substitution.  And so, I have three questions to ask you about this:

The first theory of Atonement was Moral Atonement.

The one that has been most consistently held by the church is Christus Victor:

And the ones that assume that God demands violence are the Satisfaction theory, Penal Substitution and the Governmental theory.

Isn’t it interesting that the ones we’re most familiar with are the ones that involve God demanding violence?

I know you’re wondering, what does all this have to do with Remembrance?  Well, for those of us here who hold to a view of Atonement in which God demands violence be done to Jesus in order for justice to be enacted, how do we work for peace?  How do we condemn the violence of war if we believe in a God who NEEDS violence in order for peace to be enacted?  If our creation story is utterly at odds with the myth of redemptive violence, how is it that three of our theories about Jesus’ work of atonement involve redemptive violence?  I know this is a big deal, to suggest there may be problems.  But ignoring the problems isn’t going to make them go away and we need to think about that.

As we seek to remember those who have died in war and the many who have survived but remain traumatised, do we as Christians have anything better to offer than more redemptive violence?

Let us look at the sheer scale of war. 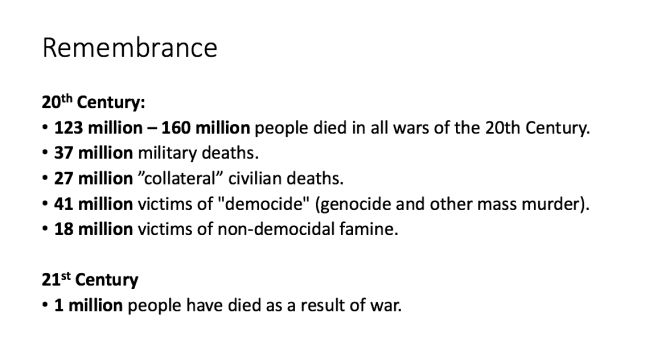 With numbers like this, we have no way of comprehending the enormity of it.  Each individual who was killed had family members whose hearts were broken by their loss.  And for all the people killed, there are many more who survived, but were or are irrevocably broken; their partners, children, other relatives and friends who have had to live with the impact of their beloved person now a shell of what they were.  Generational trauma.  People here whose parents or grandparents were damaged war, who still live with the scars of being raised in traumatised families.  War ruins lives, even as it enables freedom (in some, but not all cases), but how high a price that freedom is.

It is 100 years since the end of World War 1, where there were 20 million deaths and 21 million wounded. This included 9.7 million military personnel and about 10 million civilians.  HG Wells famously said that this was the war to end all wars, but with the wisdom of hindsight we know this was a ludicrous statement.  Perhaps he too was caught up believing the myth of redemptive violence; that war can be ended through war.  George Orwell described such sentiments as “doublethink” in his novel 1984; war is peace, freedom is slavery, ignorance is strength.

Even though the cost of war is so high, we find that historians are suggesting that our current global politics suggests we are only years away from a repeat of World War II, with increasing nationalism across the globe, the breakdown of relations in Europe, and the rise of fascism in America, Brazil, Hungary, Ukraine, India, Poland and elsewhere.[2]  In Yemen, the civil war has causing a brutal famine, and the UK continues to sell weapons to Saudi Arabia, who are one of the main drivers of the war.  Even the church of England is not immune from accusations of contributing to war; in recent years Church House in London has hosted the RUSI land warfare conference.[3]

Are we as Christians interested in these political developments?  Or do we think they are irrelevant to us?  You may be thinking that I should be focussed on those who died and not on things like politics.  However, does remembrance simply mean that we pause for a few moments in November to remember death, or does it also mean actively working to prevent war? Protesting unjust systems, voting in ways that will increase peace and not sow discord and division.  How do we work to support those impacted by war? Both the soldiers, and civilians, whose lives are destroyed and whose families live for generations with the impact. It is a huge issue, and we can feel utterly discouraged and disabled by the enormity of it.  But thankfully, regardless of how we understand atonement, as Christians we do not do this alone.  Jesus’ death and resurrection transformed our relationship to God, and through the Holy Spirit, we can not only be transformed, but also work to transform the world.  We can ask for God’s wisdom and discernment to know how to be part of healing the world. And often that will be as much about how we bring peace to our friends, neighbours, families, and communities, as it is about bringing peace to the world.  And no matter how often we despair at the world, we must remember Jesus’ words:

“I have told you these things, so that in me you may have peace. In this world you will have trouble. But take heart! I have overcome the world.” (John 16:33

One thought on “A Sermon for Remembrance Day; The Myth of Redemptive Violence”